Watch the whole film, it's broken into 14 parts - here's Part 1 of 14, they're are all available on http://www.youtube.com/user/jambedavdar#p/u and you can watch & cycle through them all on youtube. Jambe has also made 'Building Empire' and 'Returning to Jedi', see part 1 of both below and find all the other parts on youtube also. See Jambe's blog here: http://buildingempire.blogspot.com/

The Background
Four years in the making - Star Wars Begins is an unofficial commentary to Star Wars by editor Jambe Davdar. It offers an insight into the development and creation of film. The documentary combines video from the movie itself with seen and unseen behind the scenes footage, rare audio from the cast and crew, alternate angles, bloopers, reconstructed scenes, text facts and more to give an in-depth look at the process which brought the film to the big screen. Duration: 2hrs 18mins

"Phenomenal. Honestly - just...stupendous. I can't say enough about it -﻿ I've been a fan since it came out and I learned 20 things in Part 1 alone. Now I'm honestly pissed the studio couldn't make something this incredible and release it on the DVD. And all of that has nothing to do that it was made by a FAN? I can't imagine how much work went into this - and to think it's the best SW Doc I've ever seen. Amazing." byrnesmp, youtube fan comment 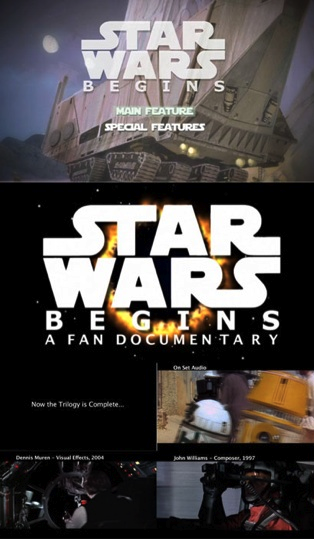 Thanks to @gavrov for tweeting about these films...

I for one enjoy my LEGO making sessions with my 3 year old a little too much, maybe Im a AFOL at heart! Watching this I retained a smile throughout and was itching to get a few hours in some of those guys LEGO studios - they are LEGOLICIOUS!

This is a well put together documentary on the world of Adult LEGO fans, as one comment on Vimeo said 'Great documentary. You treated the subject with humor and respect' and a subject which could have been mocked instead keeps you watching for the full half hour.

Info from Vimeo about film: "Passion combines with creativity in this documentary that features a selection of AFOLs (Adult Fans Of LEGO) from the Pacific NorthWest." Directed by Jess Gibson